28th Anniversary of the Republic of Azerbaijan 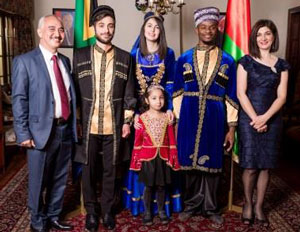 Addressing guests Mr Naghiyev spoke of Azerbaijan’s achievements in its 28 years of independence. He said that Azerbaijan will soon become an important transport hub, connecting the north and south, east and west of the entire Euro-Asian continent.

Saying that Azerbaijan is being recognized as a democratic, secular and tolerant state all over the world, he listed the Eurovision song contest, the First European Olympic Games, the Annual Grand Prix Formula 1 Racing, the International Humanitarian Forum, known as “Baku process“, Islamic Solidarity Games which were all hosted in Azerbaijan. 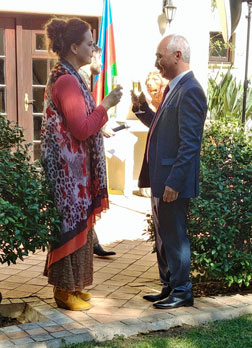 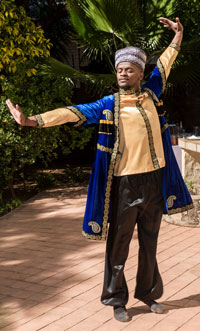 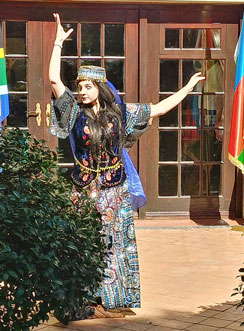 Remarks by Charge d’Affaires of the Republic of Azerbaijan Mr. Azad Naghiyev

Azerbaijan has achieved a lot for the past 28 years of independence and our citizens can be proud of it. As a result of construction of export oil and gas pipelines Azerbaijan has become one of the main energy suppliers and guarantors of the energy security of the European continent and Asia Minor. Very soon, after completion of construction of mega railways and seaport projects, Azerbaijan will become an important transport hub, connecting the north and south, east and west of the entire Euro-Asian continent.

Due to the Eurovision song contest, the First European Olympic Games, the Annual Grand Prix Formula 1 Racing, the International Humanitarian Forum, known as “Baku process“, Islamic Solidarity Games which were held in Baku, Azerbaijan has become very popular and recognizable in international the community. An image of Azerbaijan, as a democratic, secular and tolerant state has already become known all over the world.

At the same time, Azerbaijan still has something to work on. Unfortunately, the resolution of the Armenian-Azerbaijani Nagorno-Karabakh conflict has not been reached yet and 20% of our territory still remains under occupation. Achievement of peace and stability in the region is the main goal of my country.

Azerbaijan continues to tackle the challenges of the global economic recession, carrying out the necessary economic reforms. This is the country's top priority now.

Azerbaijan is interested in cooperation with all countries in the world, particularly, with the countries of southern Africa. We do have good relations with all these countries. In particular, Azerbaijan and South Africa successfully cooperated in the UN Security Council, being non-permanent members of the UN Security Council; we continue our close cooperation in various institutions of the UN, the Non-Alignment Movement and other international organizations.

The Embassy of the Republic of Azerbaijan was opened in 2012. We are also accredited to Mozambique, Angola, Swaziland and Zimbabwe. For the time being, a lot of work has been done and a firm basement has been set up for the further development of relations in all areas of our cooperation. Today, the Chamber of Commerce of Azerbaijan-South Africa and the Society of Friends of Azerbaijan in South Africa are actively working. I do hope that South Africa will open its diplomatic representation in Azerbaijan soon and thereby give a new impetus and acceleration to the development of our friendship and relations.