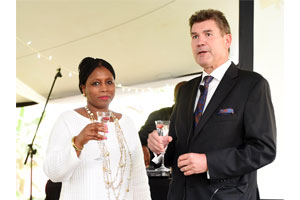 “Clearly we are doing things right, as total merchandised trade between our countries increased by 20.3% last year, with South Africa having managed to narrow its trade deficit with Germany by almost 8%,” Minister Dlodlo told those at the celebrations.

“We warmly welcome the continued vote of confidence by leading German companies to expand their investments in South Africa. We look forward to even further improvement in this regard, and remain available to assist potential German investors in developing further investment opportunities in our country through our various investment promotion initiatives,” said Minister Dlodlo.

The two countries are making steady progress in their bilateral relations as they continue to enhance the historically close relationship.

South Africa and Germany have over the years cultivated an extensive relationship across many areas of interaction and cooperation. In 2016, the countries’ reaffirmed their strategic partnership through the successful ninth Bi-National Commission (BNC) meeting.

At the meeting held in Berlin in November under the co-chairpersonship of International Relations and Cooperation Minister Maite Nkoana-Mashabane and former German Foreign Minister Frank-Walter Steinmeier, issues such as global developments and increased focus on youth employment were discussed.

Cooperation in the fields of science and technology, the environment and energy, among others, was discussed.

“We hope to give further impetus to this relationship during the BNC mid-term review later this year, and we look forward to hosting the 10th BNC in Pretoria in November 2018,” Minister Dlodlo said.

She congratulated Germany on the G20 Summit it hosted in July under the theme ‘Building Resilience, Improving Sustainability and Assuming Responsibility’.

“Given the theme, South Africa was particularly pleased with the leadership which Germany provided in placing development in Africa on the front-burner of the G20 Summit through the adoption of the G20 Africa Partnership under the final G20 Leaders’ Declaration,” said Minister Dlodlo.

She took the opportunity to congratulate former Ambassador Walter Linder in assuming the position of State Secretary of the Federal Foreign Office.

Minister Dlodlo said South Africa looks forward to welcoming a new German Ambassador to South Africa soon and to the continuing of our extensive work programme.

Closeness and history shared by SA and Germany

“Our people are very close. I want to concentrate on the emotional and political closeness of our people. I have made three observations, the first one being about the commonality, the joint challenges that our two peoples encountered at the same time. I don’t want to remind you of the events in this country in the early 90s,” said Kampmann.

“We learnt that these would be challenges that would last more than a generation. I would like you to see Germany in the same time in other circumstances but comparably had to face enormous challenge of overcoming past injustices of equalising economic differences of an enormous quantity,” said Kampmann.

Kampmann said the young generation in Germany takes part in the goings on of South Africa more than in any other country.

Minister Dlodlo said South Africa sees Germany as a good friend and wished the country well as it celebrates its 27th Year of German Unity.

The German Unity Day is celebrated annually on 3 October. It marks the anniversary of the nation’s unification in 1990.