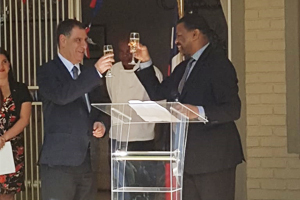 The Ambassador of the Republic of Chile, H.E. Francisco Berguño and Déborah Siraze hosted a reception on 18 September 2019 to celebrate the 209th anniversary of the establishment of the first autonomous government in Chile in 1810.

Ambassador Berguño said that Chile continues to be a vibrant and open economy, fully connected to the world and committed to upholding the values of freedom, equality, non-discrimination, democracy and human rights and that Chile’s longstanding friendship with South Africa is based on these shared values.

We are extremely honoured that you have taken the time to join us today as we celebrate the 209th anniversary of the establishment of the first autonomous government in Chile in 1810. This date marks our first steps in a process that would eventually lead to our full independence a few years later.

During these just over two hundred years, we have gone through different stages of development and integration into the international community and we have lived global events from our unique perspective. Today my country continues to be a vibrant and open economy, fully connected to the world and committed to upholding the values of freedom, equality, non-discrimination, democracy and human rights.

We have a longstanding friendship with South Africa that is based on these shared values and that stands on very solid pillars.

In 1998 President Eduardo Frei was received by President Mandela here in South Africa. In 2004 President Ricardo Lagos attended the inauguration of the second term of office of President Thabo Mbeki, who himself visited Chile the following year. President Bachelet officially visited South Africa in 2014, meeting with former President Zuma and participating as keynote speaker at the Annual Conference of the Mandela Foundation.  More recently, just a few weeks ago, Presidente Sebastián Piñera and President Cyril Ramaphosa met on the margins of the G7 in Biarritz to discuss issues of mutual interest.

These high-level meetings and visits reflect correctly the excellent state of our relations.

We also consider our relation with South Africa a strategic one.

We are fully committed to continue building upon the wide array of bilateral instruments that we have established for this purpose. During these past years, we have created a political dialogue mechanism, a joint commission on commerce and investment; we have signed multiple agreements including in the areas of double taxation, Defense, exemption of visas for all passports, the fight against drug-trafficking and organized crime, cooperation in the field of mineral resources, as well as science, technology and Innovation, among others. We are now negotiating new agreements, expanding into further areas of mutual interest.

In two weeks time, the Joint Commission on Trade and Investment will convene in Pretoria for its sixth annual meeting with a view to bolster bilateral trade. We also look forward to reconvening our political dialogue mechanism with South Africa, in Santiago, which will provide an excellent opportunity to take stock of the state of our relations.

Education and professional formation also play an interesting part of our agenda. Chile provides every year up to 30 fully funded two year post graduate scholarships to nationals from Angola, Mozambique and South Africa. We provide training courses in Aquaculture and Public Administration to these same countries, and as of this year to Botswana. We have various Chilean NGOs with educational projects in Southern Africa. In this regard, we have with us today three Chilean volunteers from the Amandla Foundation who have a wonderful project in Limpopo targeting small village education. If I may recall the words of Nelson Mandela: “Education is the most powerful weapon which you can use to change the world.”

Santiago will be the scene for at least two important international events this semester. The APEC summit which will meet in November and will bring together the major economies of the Pacific Rim. Then, in December, Chile will host the Santiago Climate Change Conference, UNFCCC, COP25, including a High-Level Segment to which President Cyril Ramaphosa has been invited. We indeed hope we may host President Ramaphosa on that occasion, as well as other dignitaries from around the world.

Climate Change is one of the most pressing international issues we currently face on the international agenda and Chile is committed to doing its part including through the hosting of this important event. I believe we are all aware that tackling climate change requires a global approach and a firm commitment by all our countries. I am confident that the Santiago Summit will be a successful event.

This reminds me that a few days ago, I saw a note on a bookshop window. It read as follows: Please notice that the post-apocalyptic fiction books have been moved to the section on current affairs. Definitely not a good sign. And yet I am confident that this is temporary and that these books will soon find their way back to the fiction shelves.

I will stop my intervention here, but please allow me to address a few words to my fellow Chileans gathered here today: