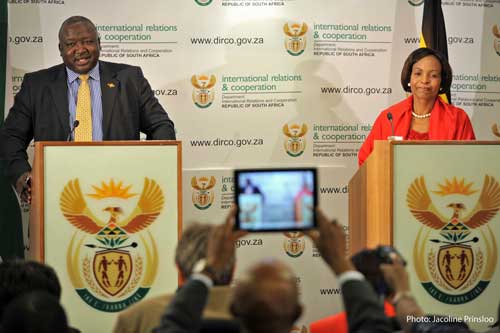 9 November 2012
Remarks by the Minister of International Relations and Cooperation, Ms Maite Nkoana-Mashabane, on the occasion of the Joint Press Conference following the conclusion of the Inaugural Session of the Joint Commission of Cooperation between the Republic of South Africa and the Republic of Uganda, Pretoria, 09 November 2012 Hon Mr Sam Kutesa, Minister of Foreign Affairs
Members of the Media, Ladies and Gentlemen, Good afternoon and welcome to our briefing at the conclusion of the inaugural session of the Joint Commission of Cooperation (JCC) meeting we co-chaired with Honourable Minister Kutesa, Minister of Foreign Affairs of the Republic of Uganda.
Prior to our meeting today, the fraternal relations that exist between our two countries were cemented by the two State Visits undertaken in 2010 and 2011 by President Jacob Zuma to Uganda and President Yoweri Museveni to South Africa, respectively.
The Agreement between our two governments establishing the JCC, signed in July 2010 during the State visit of President Zuma to Uganda, is the mechanism through which cooperation between our two countries can be enhanced.  I am therefore delighted that the two countries met today in order to inaugurate the JCC and to discuss the further deepening of our bilateral relations.
The Honourable Minister Kutesa and I held official talks this morning.
We are satisfied with the current state of bilateral cooperation between the two countries as conducted within the framework of the JCC.
We have agreed on the need for our two countries to meet regularly in order to maintain momentum in the implementation of decisions agreed upon in the JCC.
We further agreed on the need to continue working together to create opportunities which will ensure economic and social development in our countries, which will in turn lead to job creation and the alleviation of poverty.
We are encouraged by the signing of three new legal instruments in the Defence, Transport and Water and Environmental Affairs sectors which will provide the framework for programmes of action and cooperation projects to be implemented in these specific sectors.
Besides the abovementioned sectors, both delegations agreed that additional areas of cooperation should be considered in agriculture, science and technology, social development, tourism, higher education, human settlements and public works.
We also reiterated our commitment to improving and strengthening our economic relations by enhancing cooperation between the business communities of the two countries, as well as facilitating further trade and investment. In the same vein, both countries agreed to encourage people-to-people contacts through exchange programmes and tourism.
We also shared with the Minister our intention to work together in the development of the infrastructures of our countries. As we are convinced that closer economic cooperation between the two countries is the key to economic development, so too will the creation of the necessary infrastructure facilitate the free movement of goods and services between the our countries.
Ladies and gentlemen,
On the political front, we had extensive discussions on developments in the African continent in general and the East African and Great Lakes Regions in particular. We both shared our concerns about the deteriorating security situation in the eastern part of the DRC. We have agreed to enhance the cooperation between SADC and the International Conference for the Great Lakes Region and re-double our efforts to assist the DRC in resolving its current internal disputes.
We have identified common ground in most areas and have agreed to the process of implementing our decisions which we will review during the next Session of the JCC in Uganda. I am convinced that the outcomes of our deliberations at this JCC will take our bilateral relations to a new level.
DIRCO